STD Babies – Who Is at Risk?

For most women, expecting a baby is a joyous occasion but in some cases, it can also be a time of nervousness when sexually transmitted diseases (STDs) are part of the equation.

Read on to learn more about how STDs affect babies and who is at the greatest risk.

One of the greatest predictors of sexual health is the status a woman has with her male partner according to the CDC.

Maintaining a long-term relationship can reduce the risk of sexually transmitted disease transmission.

But even if a woman has only one partner, she may still be at risk if her male partner has risk factors such as multiple partners and unprotected sexual activity.

This makes it important for women to understand her partner’s activities and to protect herself.

While relationship status is the greatest predictor, there are other factors that increase one’s risk of becoming infected with a sexually transmitted disease.

For example, there is a direct link between living in poverty and STD infection.

Lack of access to medical services and homelessness are also big factors when it comes to STDs.

Women who don’t have adequate resources are more at risk for this type of infection and less likely to get treated.

Women who are pregnant and at risk for sexually transmitted diseases should be tested for them.

This allows health providers to treat some infections during the pregnancy and in other cases be prepared to deliver the baby in such a way that the risk of transmission to the baby during delivery is low.

While it would be best to be tested before becoming pregnant, testing as soon as possible during pregnancy will be beneficial for both you and the baby.

The CDC recommends that all women who are pregnant are tested for STDs.

If you have an STD, your doctor may be able to treat it during pregnancy.

For example, chlamydia, gonorrhea, syphilis, bacterial vaginosis, and trichomoniasis can all be treated with antibiotics and cured while you are pregnant.

However, viral illnesses such as herpes, hepatitis B, hepatitis C and HIV cannot be cured.

Some treatment can reduce the risk of pregnancy complications and transmitting the diseases to the baby during delivery.

Babies can also be treated and vaccinated right after birth for some viral illnesses.

In the case of hepatitis C, there is no vaccine but babies can be monitored to determine if further treatment is needed.

The best thing you can do is prevent sexually transmitted infections so that you don’t develop an STD or have pregnancy complications.

There are a few things you can do.  The only 100% way to avoid STDs is to abstain from sexual activity.

However, for most people sexual activity is part of typical relationships.

But being with a partner long-term in a mutually monogamous relationship can reduce your risk if that partner has been tested and is negative for STDs.

You can also reduce the risk of transmission by using condoms correctly every time you have sex.

Before seeking to become pregnant, make sure that both of you are tested and are free from STDs.

If you are a pregnant woman and also have a sexually transmitted disease (STD), you may feel very concerned about your health and the health of your baby.

It’s important to know the facts and to work with your healthcare provider to have the best possible outcome.

First, make sure you have the proper diagnosis.  According to the CDC, it’s important for women who are pregnant to be tested for STDs as soon as possible.

This will help your healthcare provider to have all the information.

It’s also important to realize that you can become infected with a sexually transmitted disease during pregnancy.

So if you’re having unprotected sex and feel you may be at risk you can test any time throughout your pregnancy.

Each type of STD can have a different effect on pregnancy and your baby.

For example, herpes doesn’t usually cause problems during pregnancy, but can be transmitted to the baby during delivery and can affect her eyes, skin, mouth, and nervous system.

To prevent this, women who are known to have herpes typically undergo a C-section delivery.

Chlamydia and gonorrhea can actually cause problems during pregnancy and even lead to increased risk of miscarriage or premature delivery.

Both can lead to eye infections in newborn babies.  The good news is that both can be treated with antibiotics during pregnancy to reduce the risk of these problems.

Syphilis is another infection that can lead to problems for babies.  In fact, it can cause miscarriage or stillbirth.

But like chlamydia and gonorrhea, syphilis can be treated during pregnancy to stop the infection from spreading to the baby and to stop it in the mother.

HIV is a virus that causes AIDS.

It can be transmitted to a developing fetus during pregnancy.

However, if the mother is treated with medication during pregnancy the risk is as low as 2 percent of transmitting it to the baby.

Once babies are born they continue treatment for a time to reduce the risk of the disease developing.

One of the most common STDs in the world is human papillomavirus (HPV).  This is the virus that causes genital warts and leads to cervical cancer in women.

It’s rare for a baby to be exposed to HPV during childbirth, but it is possible.

If the baby does become exposed, he can develop recurrent respiratory papillamatosis – a condition that causes tumors to grow in the throat.

Hepatitis B and C are also infections that can be transmitted to your baby during pregnancy.  They can both lead to liver disease in the baby.

For hepatitis B, babies with positive mothers will be vaccinated at birth to prevent problems.  In the case of hepatitis C, children will have to be monitored as there is no vaccine.

It’s important to be screened for STDs before and during pregnancy to get the best possible care and prevent complications.

STDs during pregnancy By Amber Ainsworth

According to MDHSS, women should be tested during their first prenatal visit and again at 26-28 weeks.

If a woman injects or uses drugs, has an STD or has more than one sex partner, she should be tested again at 36 weeks or delivery, even if the other tests were negative.

With testing, women can begin necessary treatment if they are found to have an STD.

Babies may also need treatment at birth, according to MDHSS.

Early treatment can help prevent the baby from being born with the infection or facing serious health issues.

“If a physician is aware of the woman’s infection before the baby is born, they can provide treatment to ensure the baby doesn’t become infected,” says Dr. Eden Wells, chief medical executive for MDHHS.

According to MDHSS, in the past five years there have been three preventable cases of perinatal Hepatitis B, three cases of congenital syphilis and three babies born with HIV infection in Michigan.

Past STDs Linked to Pregnancy Complications

A new study in 2018, suggests women with chlamydia or gonorrhea infections before or during pregnancy have an increased risk for complications.

Those with gonorrhea more more than twice as likely to deliver their babies too soon as well.” (Via WUSA) The study was led by Bette Liu of the University of New South Wales in Sydney, Australia.

Her focus — to see how pregnant women fared when they previously had chlamydia or gonorrhea.

Nearly 85% of those women had been diagnosed with the sexually transmitted infections before becoming pregnant.

Among all the women in the study: 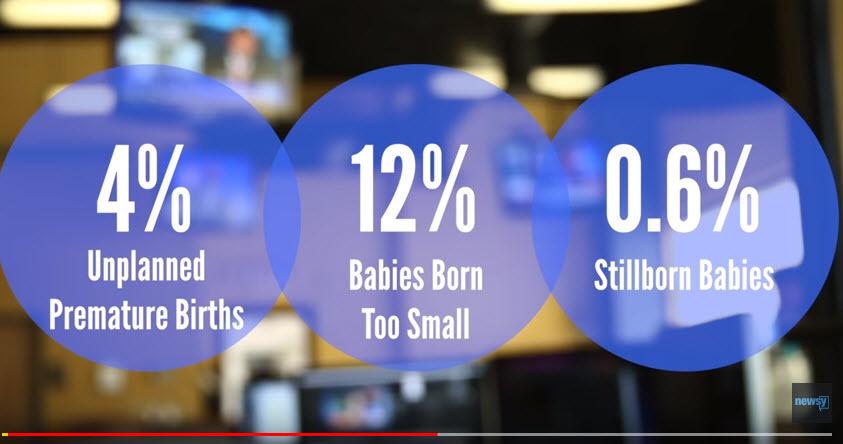 “Factors such as age, social disadvantage, smoking, and underlying conditions, such as diabetes and high blood pressure, can all increase the risk of birth complications, and this was evident among the women studied.” (Via Science Codex)

But the researchers took even all that into account, and say the women with chlamydia or gonorrhoea infections were at greater risk.

Chlamydia or gonorrhea are two common sexually transmitted infections and are already known to cause complications during pregnancy.

However, the research suggests the effects of these infections last well after they are treated — which means a lot in countries where the rates of these STIs continue to rise — like the U.S. and U.K. (Via Daily Mail)

But researchers believe they still have a long way to go in terms of proving a direct cause between infections and pregnancy complications,

Conclusion: “Our results suggest that sexually transmissible infections in pregnancy and the preconception period may be important in predicting adverse obstetric outcomes.” (Via Sexually Transmitted Infections)

The study was published September 4 in the journal Sexually Transmitted Infections..