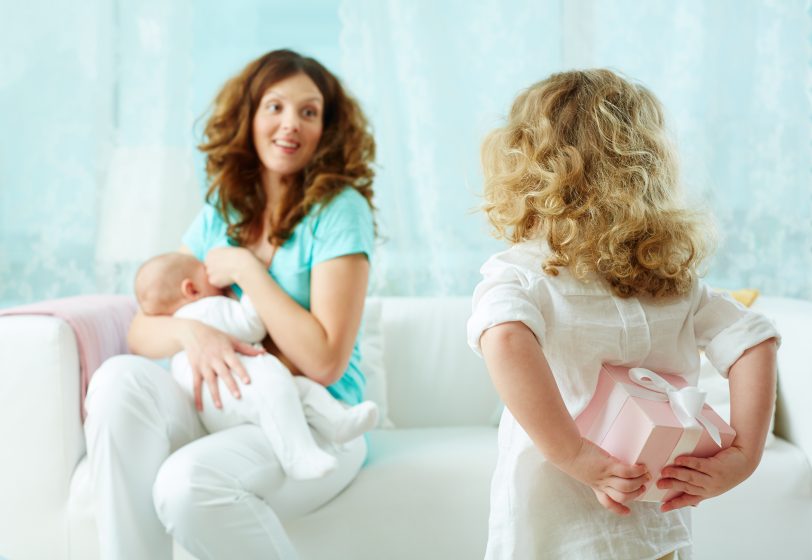 There are lots of decisions to make when there’s a baby on the way.

One of the most controversial is the ever raging “breast or bottle” debate.

There are many people who have strong feelings on both sides of this issue, and many of them will try like a televangelist to get you on their side.

I’m not going to do that.

I’m going to give you the facts, and share some personal insight on the subject, which hopefully will leave you feeling good, whatever your choice.

There are nutrients in breast milk that help your child’s brain develop, and try as they might, formula makers cannot replicate these nutrients.

Breastfeeding protects your child from illnesses because, as long as he or she is nursing, they are protected by your immune system, which is much more developed than theirs.

Breast milk is very well tolerated by babies, and hardly ever causes gastric problems, and breastfed babies are less likely to be overweight.

But, realistically, the scientific facts are not the only things to be considered.

Women who simply don’t want to breastfeed will probably not be very successful.

Even some women who want to breastfeed will find it so difficult, that they are miserable trying to make it work.

Some women will have difficulty making enough milk to satisfy their baby’s hunger, and some women will suffer more pain with breastfeeding than they can endure.

If you fall into one of those categories, don’t beat yourself up.

Your baby can do quite nicely on formula, too.

When my daughter was born, I was anxious to breast feeding.

I had two boys, but one is my husband’s by a previous marriage, and the other was adopted at ten months, so this was my only chance to be pregnant and breastfeed.

I read all the books I could get my hands on, and like a fool, spent a bunch of money on a breast pump.

Well, it turns out that my nipples are not exactly a matched set, so my daughter completely rejected one nipple.

So, I nursed on the side she would take until my nipples looked like ground beef.

Plus, she was an eight pound eating machine at birth, and no matter how long I nursed her, I couldn’t satisfy her appetite.

Even with pumping from the breast that she rejected, she was always hungry.

I made myself crazy from it, worked with two different lactation consultants and tried every trick in the book, but still every attempt at nursing ended in tears.

After two miserable weeks, I gave in and put her on formula.

Now that I’ve told you that story, I’ll tell you this.

If I ever had another baby, I would try breastfeeding again.

I would try again to give my child the best from a nutritional standpoint.

But, I understand now that sometimes it just doesn’t work, or it isn’t right for you, and that doesn’t mean that you’re not a good Mom.

Breast or bottle is a personal choice. Weigh the facts and the preferences, and make the choice that is right for you and your baby.

Whatever you decide, you don’t owe anyone an explanation.

Mother’s milk is one of the best foods for babies that anyone could think about.

It contains ample amount of proteins and nutrients which could beat any other health drink for your child.

The usefulness of this milk becomes more important because it protects the baby from some of the worst health problems.

There is no substitute for breast milk so providing this milk to your child would be the best thing to give to your child.

Breast milk contains lactoferrin which helps in absorption of iron and protects the intestine from any harmful bacteria.

The other component called lipases helps in digesting your fats which helps in baby’s growth and development.

The IQ of the child also increases by providing breast milk.

It saves lot of time and money as you don’t have to sit up late night and mix the formula for your baby.

The cost baby food is also cut which gives more time for the mother to be with her baby.

It creates a bond between the mother and child which binds them together.

Nursing helps the mother to loose the extra pounds which she gained during her pregnancy.

It burns out lot of calories which helps in bringing back the original size.

If there are any chances of bleeding after child birth it lessens due to breast feeding.

The risk of breast and ovarian cancer is minimal.

-To arouse lactation for better quality and quantity, consumption of alfalfa is very useful
-To remove the hard feeling from your breast place a wet towel on your breast for 10 minutes which has been soaked in hot water
-Use of chamomile helps in controlling inflamed breast
-To minimize pain and inflammation, use of castor oil is very useful
-Having the baby in different positions for feeding also helps
-Consumption of fennel tea and almonds helps in increasing the milk production
-To relieve pain massaging Vitamin E oil on your breast is very good
-Having good amount of yogurt or curd helps in keeping the bacteria and other infection at bay