Toddlers are filled with high energy, curiosity and impulsiveness. They spend their days testing the world around them and practicing their own power over others.

Yet toddlers are also resilient, understanding and loving, which means they respond well to patience and kindness.

Although toddlers need to have some control over their day, the majority of decisions are best left in the hands of parents and caregivers.

Whether to keep a child safe or work together as a family, toddlers will continue to require the gentle guidance offered by adults.

Although toddlers aren’t much older than they were in their infant hood, their growing independence makes them more like little adults than babies.

When toddlers abruptly stop obeying the rules, frustration settles in for both kids and parents.

This causes adults to yell, while toddlers react by acting out.

Understanding toddler behavior is the first step to identifying with children, but knowing how to offer guidance is equally important.

Children do not respond well to loud voices or empty threats.

This is especially true during the toddler years, as most don’t recognize they are doing anything wrong in the first place.

When offering direction, use a firm voice, but keep the tone steady.

Kneel down to the child’s eye level and explain the rules without giving negative body language.

Instead, practice effective nonverbal communication that toddlers will benefit from.

Nonverbal communication is especially useful with young children since they are still grasping their own language skills.

Show toddlers a caring and empathic attitude by giving a hug, patting them on the back or delivering a big smile after explaining, in easy words, what action was not okay.

When handling situations with this approach, toddlers understand that it was their behavior that was not acceptable, not them.

Remember that children are creatures of habit. They may continue to exhibit the same behaviors, but will soon learn what is and is not acceptable by the consistent rules put in place.

Offering guidance isn’t always as black and white as it may seem.

Just because an adult says “no”, doesn’t mean the child will readily accept it.

In fact, it’s much more common for toddlers to act out, throw tantrums and get aggressive than to walk away agreeably.

Yet even with these reactions, it’s important to stick to the rules. Parents often become tired when dealing with their toddler’s antics and give in to his or her demands.

For example, when a toddler starts to resist, offer some type of distraction such as a new activity.

A toddler’s short term, impulsive memory works in adults’ favors, so move ahead to something new.

Use the word “yes” more than “no” such as by explaining that toys are for playing and not throwing, instead of yelling out “no.” Make sure to praise good behaviors instead of focusing on the negative ones.

More importantly, remember the role of mentor, so be sure to lead by example.

How to manage challenging behavior in early childhood environments.

In this first short video you’ll learn about the key components of the KIDS’ OWN WISDOM approach that get kids voluntarily taking personal responsibility for their own challenging behaviors.

Without resistance, believe it or not. 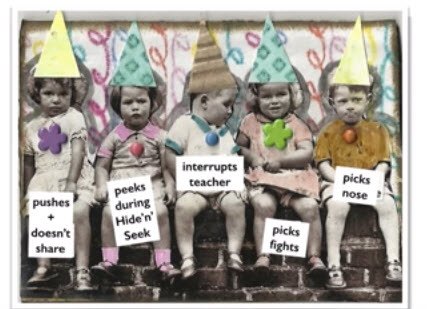 Of course you do we all do.

How many times have you told kids DON’T push.

And how many times have you had to repeat those DO’s and DON’Ts?

A lot … over and over again.

Of course it’s our job, as parents and teachers, to teach kids about the DO’s and DON’Ts that support them in their social emotional and life skills development, but at a certain point we’ve just got to stop telling them, over and over again, because I’m sure you relate to this: at a certain point they’re just tuning us out, so nothing good is being accomplished …

Sometimes quite the opposite.

He went on to explain the direct implication of his blank slate theory, that children need to be taught EVERYTHING.

Now obviously we are not going to argue with Locke when it comes to teaching kids straight up about numbers.

How to count, how to add and subtract. We don’t disagree with Locke that the only way kids are going to learn the alphabet and how to read it if we teach them what they need to know.

The same thing goes for learning facts about the world.

The thing is, kids are generally OK and wide open to learning about those subjects because – and this is a very BIG “because” – they’re not invested in those subject.

Those subjects are not personal to them … which is why we do not agree with Locke’s Blank Slate theory when it comes to kids’ individuality.

What to do with these facts?

We say accept them and WORK with them .. and so the heck with John Locke and his Blank Slate Theory.

Here are five keys to success for managing challenging behavior by working WITH the fact that kids were NEVER blank slates when it came to their own feelings.

And by the way, not only would kids – including you and me – never blank slates, but by genuinely and consistently acknowledging that fact kids thrive, shine and COOPERATE more and more. 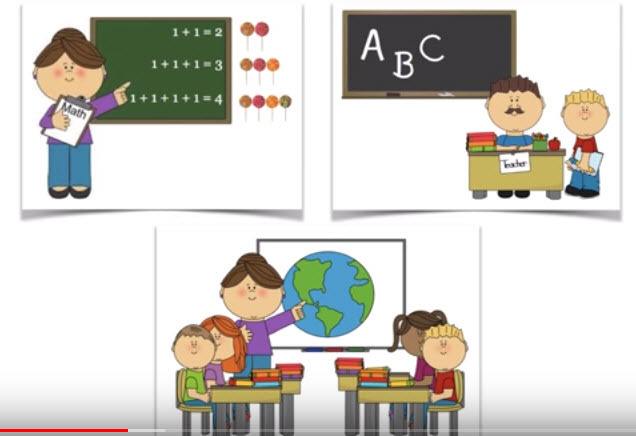 Second key to success with managing challenging: behavior empathy is hardwired at birth.

You know what that means?

It means you don’t have to try to teach empathy.

You just need to create multiple opportunities that draw out that inborn capacity from kids.

Third: Most kids are naturally inclined to adjust their own behavior once language is main tool of communication, which usually happens by 4 or 5 years of age.

Fourth: Kids are fascinated by each other, which is an essential key for success in helping them to make the kinds of behavioral choices that actually work for everyone including themselves, rather than just themselves.

And the fifth fundamental key to success: kids want, need, and deserve to be seen, to be listened to, to be acknowledged, and there is a mountain of scientific research to validate this and the previous facts, by the way.

What do we do with these five keys for successfully managing challenging behavior in early childhood environments?

We bring together groups of kids: the kids with the challenging behavior and their non-challenging peers for peer group discussions.

Discussions that are based on the kinds of questions that genuinely respect all kids’ intelligence, all kids’ personal experience and insights.

Questions that are broad enough that no one ever feel singled out … which about would give rise to defensiveness.

Instead, we use the kinds of questions that evoke kids’ own hardware capacity to empathize and objectively decipher what’s fair and what’s NOT fair.

Questions that intrigue kids enough to think about familiar situations in fresh ways.

Questions that grab kids’ attention causing them to listen to each other, which increases their awareness of each other and how MUCH they all have in common.

Which is how they find out that they all have a lot more in common than they knew they did before they sat down together to engage in peer group discussions.

Peer group discussions in which the kids do all the thinking and come up with all the solutions, oftentimes based on what we’ve been teaching them, with the extremely important element of their own internal processing.

During these peer group discussions kids receive the respect and the freedom to use their own words to express their own understanding, which science – again – educational research, tells us is how true ownership is achieved about the kinds of behaviors that truly work for everyone.

Truly. So congratulations. You have now got the basics of the KIDS’ OWN WISDOM philosophy and approach.

You are more than welcome to watch the next quick video to learn how the basics are put into action for real changes to challenging behaviour.

And I hope you’ll remember that your likes and your comments are really encouraging to us, and we appreciate them more than we can say.

The study was led by two University of Pennsylvania researchers: Jianghong Liu, an associate professor in Penn’s School of Nursing and Perelman School of Medicine, and Adrian Raine, the Richard Perry University Professor of Criminology, Psychiatry, and Psychology.

Their study provides a unique perspective on a field that often focuses on how poor diet negatively influences early childhood development.

The study results appear in the journal Maternal & Child Nutrition.

“What people are not doing is looking at positive effects of good nutrition, in particular on social behavior,” said Raine.

Liu said it’s a gap in the research she hopes this work might bridge. “No one has looked at positive social behavior,” she said.

For this study, the scientists analyzed a sample of 1,795 3-year-old children from Mauritius, an island off the eastern coast of Africa with a population of about 1.3 million people.

They focused on four aspects of physical health related to nutrition and four indicators of social development.

Physical health factors are medical issues that can include anemia, expressed by low hemoglobin levels that reflect iron deficiency.

Another condition is angular stomatitis revealed by cracked lips and a lack of vitamin B2 and niacin.

And a third is sparse hair or hair discoloration as a result of insufficient protein intake.

On Mauritius, where the majority of children have black hair, the fourth factor shows up as an orange or red tint to the hair.

The researchers considered a child with just one of the quartet as “suffering from nutritional deficits.” However, children with more malnutrition indicators showed more impaired social behavior.

To assess a child’s abilities, a research assistant observed every child’s success and rated these factors on a specified scale.

The observer knew that the research concentrated on child development and behavior but was unaware of the nutrition-related hypothesis.

Examining the relationship between these components after the fact, Liu and Raine discovered a statistically significant link between nutrition and comprehensive social behavior.

The neurocognitive relations was undiscovered to this point.

“The bigger message is give children good nutrition early on,” Liu said. “Not only will it enhance cognitive function but, importantly, promote good social behavior,” which is essential to brain development and intelligence.

Despite the diversity of Mauritius, which has Indian, Creole and, to a smaller extent, Chinese, French and English populations, the researchers acknowledge a desire to replicate their findings in large cities in the United States.

Another limitation is the study’s cross-sectional nature, meaning measurements occurred all at once rather than over a long period of time.

Ideally, Raine said, “you want a randomized control trial. You want to manipulate nutrition to see whether you can get improvements in social behavior and cognitive function.”

It’s possible to reverse the effects of poor nutrition, too, according to the researchers.