How do I feel about my child’s separation anxiety?

Honestly, it’s absolutely one of the most delightful feelings I really enjoy as a mom. I remember when my son was between 8-9 months old. Just like every mother, I couldn’t forget those moments.

At that time, he often asked for more attention from me rather than from anybody in the house.

No matter where he was or who was holding him, as soon as he saw me, he suddenly cried as if he was asking me to hold him.

When I came close to him, he abruptly opened his arms and looked so happy.

His cry stopped in a moment.

It was truly an unspoken feeling I had experienced.

But there was also time when he acted differently from what I had expected.

When I went for work, I thought he would cry hard to see me leaving him.

I hugged him tight and kissed his face again and again.

I told him, “Baby, Mommy have to go to work now.

Eat and drink a lot, okay?

And have a good nap.

Sometimes he kept looking at me when I said so.

I expected him to start weeping but it didn’t happen.

I found out later that he was interested with the wheels of the car I traveled in everyday.

Whenever the car started to run, my son always kept his eyes on the wheels.

Looking at them spinning must have been very exciting to him.

I just smiled, though my heart broke a little.

I soothed myself by thinking that it was good for him being curious of strange things.

My son is a baby who has sleeping problem.

Throughout the night during his sleep, he often woke up several times.

If he woke up and didn’t find me nearby, he would cry out loud, making the whole house panic as if something really bad happen.

When I got into the bedroom, he would crawl toward me, and then I hugged him.

Breastfeeding really worked to put him back to sleep.

Thank God I decided to breastfeed him so that I wouldn’t be engaged with the rush of preparing formula during the night. 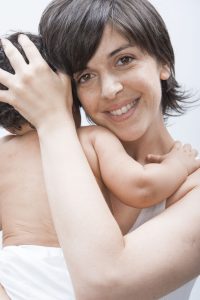 Yes, I chose to breastfeed him in nighttime, even though he still got formula in day times.

Maybe this breastfeeding activity had created the bond between us.

I enjoyed it, and still until now.

This might also what made my son didn’t want to stay away from me.

If your baby or child has the same characteristic as my son has, I’m sure you have the same feeling as I do.

If you think that your baby’s cry (for being away from you) annoy you, just remember that it won’t last forever.

Separation anxiety is a phase in your child’s development during his early years of life.

Almost all children go through this experience.

What I can suggest you is just enjoy these intimate moments before they’re gone along with your child’s growth.

From what I’ve heard from my friends about this, you’re gonna miss the moments.

To me, even now, I really don’t want the phase fade away.

There’s one more thing I’d like to share with you, which you may not think will make your child comfortable.

I remember my friend told me that if you’re going somewhere, don’t forget to tell your child that you’ll be back.

Instead of sneaking out of the house, waving your hand and saying that you’ll be back will soothe him somehow.

This site uses Akismet to reduce spam. Learn how your comment data is processed.